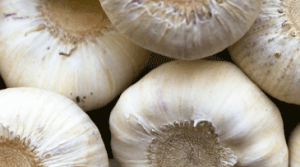 Sulfur-containing compounds isolated from garlic, known for their anti-inflammatory properties, are exhibiting chemopreventive effects in recent research by the National Cancer Institute. Diallyl Disulfide (DADS) is one such compound. DADS was shown to prevent colorectal tumorigenesis in a mouse model of colitis-induced colorectal cancer.

In this study, mice treated with the chemical carcinogen azoxymethane, as well as the colonic irritant dextran sodium sulfate, were then supplemented with DADS. The result was a reduction in tumor incidence, tumor number, and tumor burden compared to the control group. The DADS diet was also shown to resolve initial dextran sodium sulfate-induced inflammation faster than the control diet, resulting in a shortened period of inflammation and cellular transformation.

In vitro studies on the mechanism of action at work suggest that the chemopreventive effects shown by DADS are mediated through NF-kB signaling. NF-kB nuclear localization and activity were diminished in colorectal cancer cells treated with DADS. The study stated that the NF-kB suppression was dependent on DADS inhibition of GSK-3ß, and that these results were seen bothin vitro and in vivo.

DADS is just one of the many interesting sulfur-containing compounds found in garlic. LKT Labs isolates or manufactures a number of these products, including the following: